Another week, another Great British Bake Off inspired post. Week 7 saw the bakers tackle pastry, in the form of pastry parcels, the three and a half hour technical challenge to make the unpronounceable Kouign-amann, culminating in the show stopper challenge of eclairs, which I chose to tackle this week.

Choux pastry really isn’t something I choose to make that often. The last batch I made was for my savoury buns over a year ago, funnily enough for my bake off posts last year! I always seem to revert to type, leaning instead towards shortcrust or puff pastry. 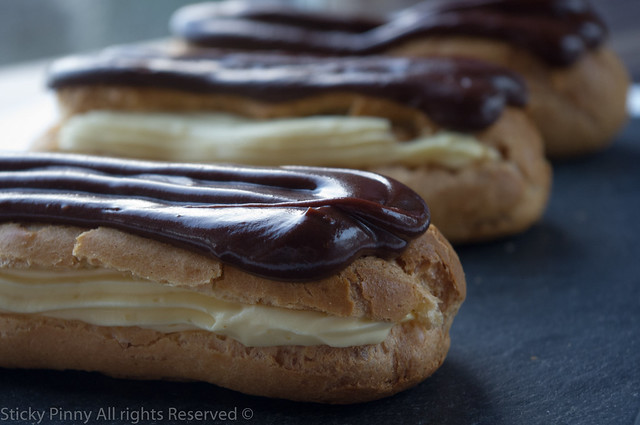 I chose not to make anything too complicated, as on the same Sunday afternoon I was also baking this cake for my work bake off (which I won, hurrah!). Opting for the classic eclair, crisp choux bun filled with vanilla infused thick crème pâtissière and glazed with chocolate, this is a creamy, rich treat. deceptively light but very very naughty.

The process for making the choux takes some elbow grease (i.e. it f**king kills!!) but do persevere with it. (Or, do as I wish I had and use an electrically powered device). The baking and assembly time for the buns don’t actually take too long and choux’ll be rewarded with a thing of beauty! 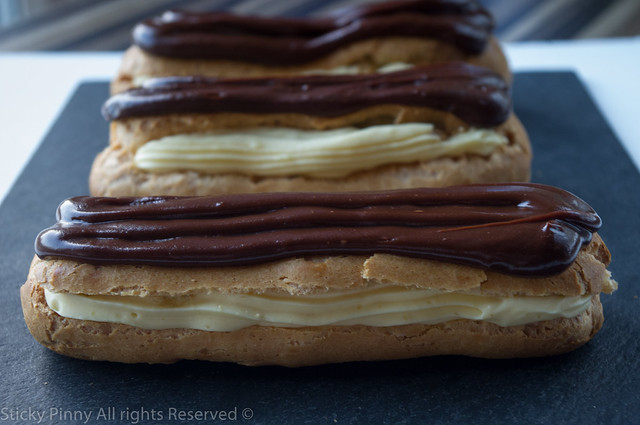 For the Choux
Preheat the oven to 200C. Line a baking tray with parchment.

Then, make the choux. Place all of the ingredients except the flour and eggs into a saucepan and bring to the boil. As soon as the liquid does boil and the butter has melted, remove from the heat, and add in flour in one go. Then beat furiously with a wooden spoon until a dough ball forms that leaves the sides of the saucepan clean. Return the pan onto a low heat and beat for a minute or so to let the mixture dry out. Remove the pan from the heat and leave to cool for 5 minutes. This is important as this paste needs to be cool enough, to not scramble the eggs, but still warm.

Add the eggs one at a time, beating the dough furiously before adding the next egg. It will seem as though the egg won’t combine, but keep beating and it will. It should be smooth, shiny and just about fall from the spoon.

Add the dough to a piping bag with a plain 2cm nozzle. pipe out into 10-12cm sausages onto the lined tray and bake for 20 minutes. Then, without opening the door, reduce the heat to 180C and bake for a further 10-15 minutes until golden and crisp. Transfer to cooling rack and use a sharp knife or skewer to pierce a small hole in the bottom of the bun, to allow the steam to escape and keep the buns crispy. Leave to cool completely before filling.

For the filling
Add all of the ingredients into a saucepan with the exception of the butter and and whisk until combined and no lumps remain. Set the pan on a medium heat, then add the butter. Continue whisking over a medium heat until it reaches boiling point, You’ll know when this is the case as the custard will thicken. Once very thick and smooth, decant into a bowl and cover with cling film. Leave to cool and then chill in the fridge.

For the glaze
Break up the chocolate into a heatproof bowl. Place the cream into a saucepan and bring to scalding point, then pour over the chocolate. Add the butter to the bowl and mix together until you have a shiny, spreadable chocolate glaze

To Assemble
Slice into the side of the choux buns. Fill a piping bag with the crème pâtissière and pipe in as much as you dare. They should feel heavy and bursting full of custard. Spread / pipe the glaze onto the tops of the eclairs

Devour straight away, but they will keep for a couple of days in the fridge. 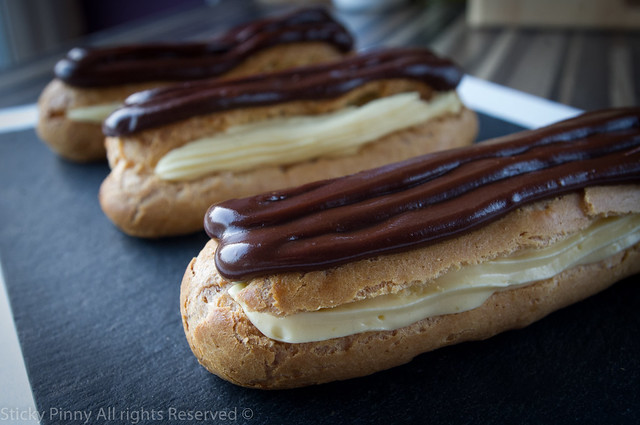