I’ll apologise now for the terrible attempt at a witty title for this post. Obviously getting old if my point of reference is a song that was released in 1981. Anyway, back to week two of my Great British Bake Off series of posts, this time then theme is biscuits! And a biscuit that despite the name, doesn’t actually have anything to do with Vienna, the Viennese Whirl. Which is actually a British creation – someone’s attempt to recreate an Austrian pastry nonetheless. 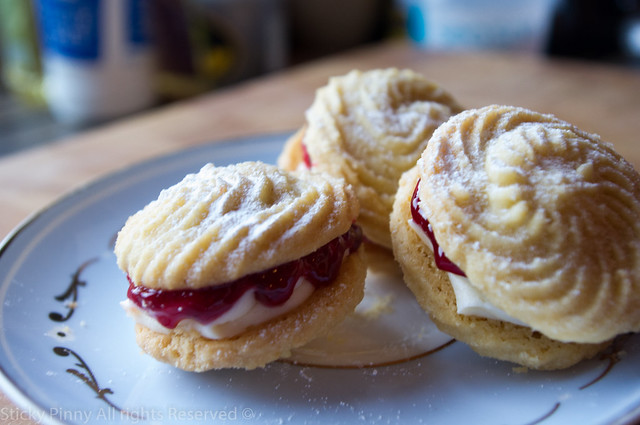 Last week’s GBBO was a tornado of sweet and savoury biscuits and some amazing 3D biscuit scenes, especially from Luis and Richard. Something I definitely wasn’t going to tackle on a Monday evening after a whole weekend of baking for supperclub.

I have to be honest in that I’m not a big biscuit eater, then again I’ve lamented my lack of a sweet tooth before. However, as a child I did love a Viennese biscuit. the ones dipped in chocolate from M&S (ooh!) were a staple in the Chan household. Crisp buttery biscuit, that melted in the mouth. Yum!

However, I decided against a chocolate dipped Viennese and decided to give the whirl, a whirl. Pretty piped disks of biscuits sandwiched with vanilla buttercream and raspberry jam, akin to a posh Jammie Dodger but that’s not a bad thing.

Crispy, crumbly, buttery, sweet and fruity this is a lovely accompaniment to a cup of tea. I have to be honest and say they were almost a bit too sweet for me, I’d have preferred a dark bitter ganache or better still some salted caramel but I was assured by the Husband that they were delicious. 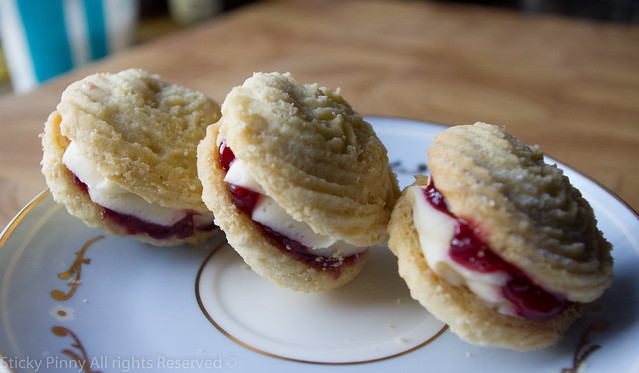 Do as I did and give them a try.

Preheat the oven to 190C. Beat all of the biscuit ingredients together until you have a smooth, pipeable paste. This might take some elbow grease and time if you don’t have any electrically powered assistance.

Transfer the mixture into a piping bag with a large star nozzle tip and pipe disks about 2 inches in diameter onto a lined baking tray. You’ll probably need to do this across two trays.

Bake for approximately 10-13 mins until lightly golden. Transfer onto a cooling rack until cold. Repeat if necessary with the next batch of biscuits.

Then whip up the buttercream, (Butter, icing cugar and vanilla) until fluffy and smooth and transfer to another piping bag.

Once the biscuits are cool, pipe the buttercream onto on biscuit half and a small splodge of jam onto another. Sandwich together. Repeat until done.

Eat and hopefully, unlike Ultravox, this should mean something to you! I’d love to know what you think. 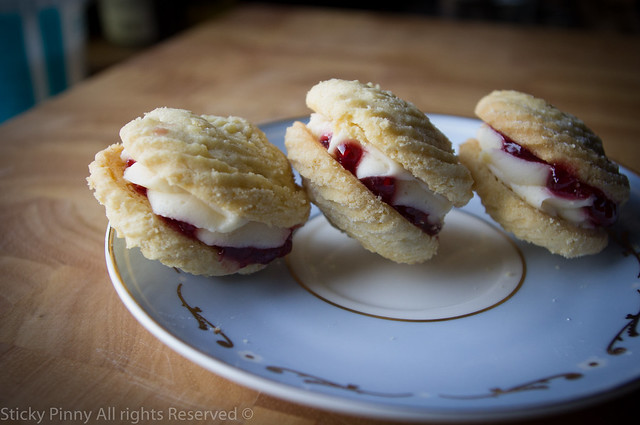 2 thoughts on “This Means Nothing to Me….Vienn(ese)! GBBO Bake”