My friend Dan is a very good cook – I’ve never disliked anything he’s made and he’s great at giving foodie hints and tips. We both subscribe to BBC Good Food Magazine and in February’s edition there was a brilliant recipe for pork belly. Dan made it for the murder mystery party I went to the other week and I was hooked. The pork was melt in the mouth and the crackling crisp. It looked really professional too and I’m all about the presentation!


Now I’ve made pork belly in the past where I’ve roasted it long an slow in the oven with good results but I really think this is the only way I’m going to cook this cut of pork. Be warned though – this is a 2 day process but the main bulk of the cooking is done on the first day and is ideal for entertaining as it only needs pan frying at the last moment.


I was missing a few ingredients for the braising stage, and because I was only feeding the 2 of us, the piece of pork belly was smaller – it was enough to serve 2, but can be easily doubled. So below is my recipe. (Note that some of the pictures aren’t brilliant as they were taken with my phone. The good ones were taken by the Husband)


Day 1:
Heat oven to 180C/160C fan/ gas 4. Place all the ingredients except the pork and sunflower oil in a pan that will fit the pork. Season, bring everything to the boil then turn down the heat and slide the pork into the pan. The pork should be totally covered – if it isn’t, top up with water. Cover the dish with a lid and place it in the oven for 3 hrs.

After 3 hours, leave it to cool slightly in the stock. Line a flat baking tray with cling film. Carefully lift the pork into the tray and make sure you remove any veg or other bits from the surface of the pork as it will end up pressed into the pork. Cover the pork with another sheet of cling film and cover with a flat tray or dish – the tray must be completely flat as any indentations will be pressed into the pork.

Weigh the pork down and leave to cool in the fridge overnight. I used my heavy stone mortar along with a couple of cans to really weigh it all down. You want to flatten the pork so with ends up all the same thickness. Strain the juices into a jug or small saucepan, cover and chill.


Day 2
Unwrap the pork and place on a board. Trim the uneven edges so that you have a neat, straight piece of meat. Cut the meat into equal pieces and set aside until ready to cook. Skim off any bits of fat (should be easy as it will be set) from the braising juices and tip what will now be jelly into a saucepan, then bubble down by about two-thirds until starting to become slightly syrupy. Add a few more drops of vinegar, to taste. 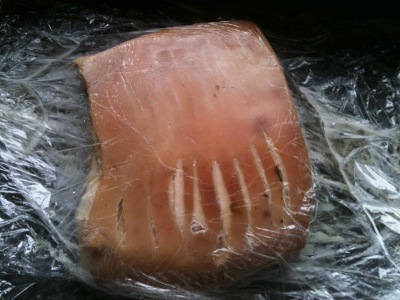 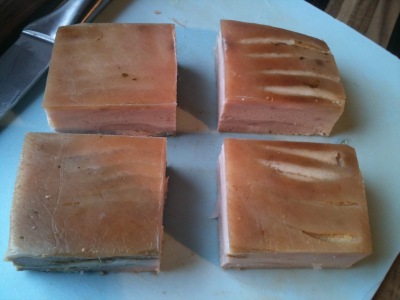 Heat the sunflower / veg oil in a large frying pan until hot, then turn the heat down. Make sure you don’t use olive oil as it will burn.


Add the pork to the pan, skin-side down – be careful as it will spit and attack you! I placed a tray partially over the pan so the it didn’t cover everything in oil. Sizzle the pork for around 5 mins until the skin is crispy. Flip it over and cook for 3-4 mins until browned.


Et voila, perfect pork! Thanks Dan for making this first, as I wouldn’t have tried it otherwise, purely because of the 2 day process!